My Latest Videos ....Use The Links Here 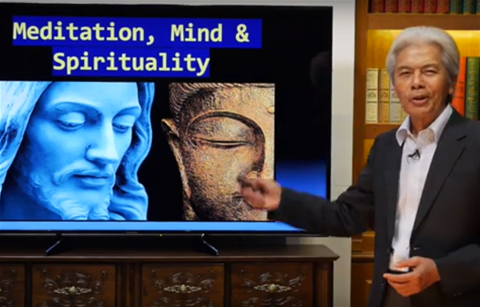 Neuroscience, Eastern Beliefs, Bible And Experience Converge To Reveal Spiritual Dangers Of Eastern Meditation, Their Christian Hybrids And Mindfulness. These 3 Videos Should Be Watched In Sequence As The Information Is Progressive.

#1 What Is Authentic Biblical Meditation. https://www.youtube.com/watch?v=hPZtiydioFE&t=35s

Join this global network formed by 5 people in the field of medicine, mental health, ex-New Age priest, ex-martial arts master, and an ex-Zen meditator. They are experts in their fields and are speakers/authors who are deeply concerned with the spread of dangerous modern spiritualism in our world.
To join, write in to healthandspirituality@yahoo.com with your name.

The objective of this site is to direct you to reliable information. All source information on this site are cross-referenced to their original source. For the purpose of differentiation when it is not obvious, this site's own comments are made in purple. Readers are welcome to raise questions and start discussion through "contact me".

Two psychologists who authored the book Buddha Pill started with 4000 research articles and concluded in chapter 5 - " Despite the anecdotal evidence on the merits of mindfulness meditation. and despite the hundreds of studies produced in the last 20 years, there was no robust scientific evidence that mindfulness has any substantial effect on our minds and behaviours." Its sexy science ! The Oxford Mindfulness Centre themselves in their own extensive study could not show proof that mindfulness is the active ingredient in MBCT that worked. Check out S#06 here on this study. Click: S #01- 07

Where does science, religion and personal experience converge in meditation?

Dissociation of brain function and brain damage causes mystical experiences ! We can romanticize these experiences but can we rely on them ? These unitive experiences had existed since the sacred sound/word "Om" established meditative contemplation 4000 yrs ago in cultures and countries that are now most divided !

Neuroscience has shown that the experiences of meditators narrow down to only a small combination of a number of neural phenomena. Much as the religious traditions that possess their respective meditative practices are varied in culture and "theology", their explanation of these experiences are consistent, not diverse. Science, religion and personal experience all converge in revealing that meditation is an awareness of unitive consciousness thru neural phenomena that are ultimately do not stand the test of reality.

From the narrative of the meditators, the one common denominator of this consciousness seems to be that each individual possess at birth, a God-given " personal-immortal-divine-entity" which awaits discovery in meditation. When that phenomena of nirvana ( Hindu), awakening ( Buddhism ) , sartori ( Zen ) , god-consciousness ( TM, etc ), being in God's presence ( Christianity ) occur, the contemplative experiences his divinity as one with the dvinity of all humanity in the DIVINE ONE [ click M #07 ] . The power of this basis of unity is evident when Pope Francis gave prominence to the US Congress in his Sept 2015 address of a Catholic monk, Father Thomas Merton whose "contemplative style" would be an example for uniting all peoples and religions [ click Archive A # 03 ] .

What is of greatest concern is that only when brain functions are dissociated and the mind is open to hypnotic suggestion, that the meditative common experience of "universal consciousness" which is variously expressed spiritually as "oneness with Divinity" occurs. Why is it that when the mind is not in meditation, when it is in any other state, that these experiences do not occur ? Mystical experiences occur only in trances, in hypnotism, with hallucinogens, with damaged frontal lobes and when frontal lobes go "offline" in meditation, these should alert us of the dangers in such practices.Click: S #01- 07

One of the most dramatic account of brain damage and mystical exoerience is Dr Jill Bolte Taylor's own observation of her own left brain going through a massive haemorrage resulting in a clot the size of a golfball. Here is her account..."and I'm realizing that my hands look like primitive claws grasping onto the bar. And I thought, "That's very peculiar." And I looked down at my body and I thought, "Whoa, I'm a weird-looking thing." And it was as though my consciousness had shifted away from my normal perception of reality, where I'm the person on the machine having the experience, to some esoteric space where I'm witnessing myself having this experience....And then I lost my balance, and I'm propped up against the wall. And I look down at my arm and I realize that I can no longer define the boundaries of my body. I can't define where I begin and where I end,because the atoms and the molecules of my arm blended with the atoms and molecules of the wall. And all I could detect was this energy -- energy... " https://www.ted.com/talks/jill_bolte_taylor_s_powerful_stroke_of_insight/transcript?language=en

The stated objective of eastern meditation is to detach from this world where good/evil, life/death, etc are regarded as illusions, withdrawing internally to something else which they term the "true-self" which by definition has to be pure spirit, body-less and thus devoid of physical, mental and ethical/spiritual boundaries. How does love, compassion, courage, joy, reality and our will exist in this state ? Or are their absence compensated by tranquility ( calmed amygdala & sleep waves ), universal oneness ( the phenomena ) , the hypnotic suggestion of being divine, energy, visualization and addiction ( endogenous dopamine ) ?   Click: S #01- 07

2 psychologist started to write a book on the transformational power of meditation, initially planning to title it " From Monster to Buddha". However, after much research, they had serious doubts about its benefits and decided to title it " Buddha Pill" because as it goes, pills would sometimes work and often do not. One of the psychologist meditates and had to "drastically reduce " the practice. Read about how meditation deadens the mind...." lack of attachment made me less sensitive and empathic to other people’s feelings. It was only when a friend joked I was becoming a ‘meditation junkie’ that the penny dropped. He was right; meditation was turning into a way of bypassing real life, or at least of avoiding the parts of it that were difficult or bitter. I had decided then to drastically reduce my practice."...... Buddha Pill, Bliss Techniques S #11 - 15 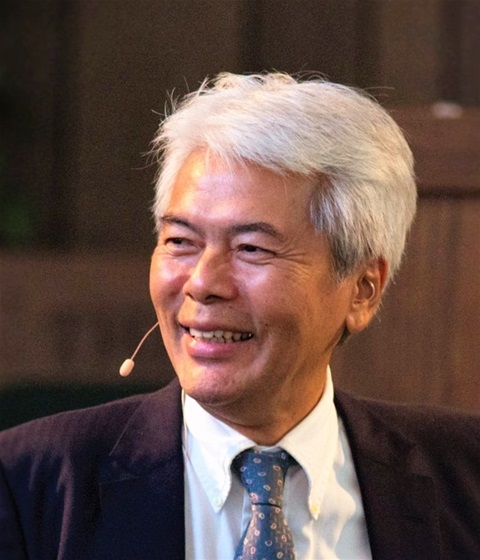 Mr. Yip resides in Singapore, was previously a Zen meditator who converted to Christianity 33 years ago.

He is a Fellow of the Institute of Chartered Accountants In England and Wales and is currently, Chairman of Aenon ( 1997-2019), a residential lifestyle modification centre and training school operating in Malaysia of more than 20 years.

Kok Tho grew up in Malaysia as a Taoist Buddhist and did Zen Meditation for 20 years and became a Christian at 38.

He is an international speaker and researcher of eastern meditation, Christian derivatives of eastern meditation and their therapeutical derivatives ( Mindfulness, MBCT, MBSR ). He has spoken at Dr Nedley’s EQ Summit in Feb 2016, in USA ( annually), Canada ( twice), Australia ( three times), UK, Germany, Netherlands, and Asia. Interviewed by 3ABN (TV) Australia for a series of three sessions for his views on meditation and videoed for a 3ABN USA documentary on modern spiritualism in June 2018. His videos are on YouTube and also on AudioVerse

His speaking engagements take him annually to the US. He has spoken at 70 churches, Bible camp meetings and also at public venues.

Hi. Where are you going after Portland? Coming to Southern California? I will watch your 3 talks in Portland in sequence. Thanks.

Mr. Yip Kok Tho,
Thanks for your perseverance to expose the truthful nature #7 of Eightfold path to Satori (vispanna) not science but Zen Buddhism New Age.

Hello. Are you traveling to California? Can you post your speaking schedule so we know if you are nearby. Thanks Jody

i am writing from Germany. We - as a SDA NGO would like to inquire, if it would be possible for you to come and speak about the topic of the dangers of eastern meditation.

Yes, be glad to speak in Germany. Let me have your contact

Meditation insidiously leads one to believe that non duality is innate. But I believe you, that it's actually a neural phenomenon caused by deactivation of important brain centers.
Thank you so much.

Please be kind to provide me with a telephone number. I would like to translate your material and adding it to my presentations on the subjects, of course, I will provide your name and full references

Thank you for the 1.5 hr YouTube video dated 2/10/16. Yor presentation was very clear and validated my personal experiences with a variety of meditative techniques and non-duality. Sneaky,scary!

Christian Psychiatrist in Florida. I would like, with YOUR PERMISSION to translate into Spanish and to prepare a Power Point Presentation based on yours titles Dangers of Meditation. Please reply.

Dear Dr Balcazar, You have my full permission to translate and to use my material for distribution. Let me have your email and I will send you my powerpoints.
Thank you. Kok Tho

Newberg Study findings on speaking in tongues and singing gospel music was eye opening. Some spin it to say God is speaking through you because the frontal lobe is shut down. what about 1 Cor 14:15

Thank you very much, I've so interested into know more about this things since I'm a pshysician and psychotherapist, and also a SDA Christian... I'm looking forward to share this. God bless you!!

Thank you so much ,Mr. Yip, for your ministry. I was surfing on AudioVerse and your messages caught my eye as there are several Bhuddists in my family. I long for my family to understand Jesus .

The two presentations you have at Weimar last weekend were excellent!! Thanks so much. I'll be sharing your website with others. However, I noticed several typos on this page that need to be fixed : )

Hi there, I am interested in becoming a certified meditation instructor/coach, what would you say is the best in order for me to receive these credentials. Christ centered of course. Thanks.

Would like to contact Will Baron about Feldenkrais, Rolfing, applied kinesiology comparisons. If you have any free material on mysticism, I would like for the research group to send them to me. Thanks

Hi. Where are you going after Portland? Coming to Southern California? I will watch your 3 talks in Portland in sequence. Thanks.